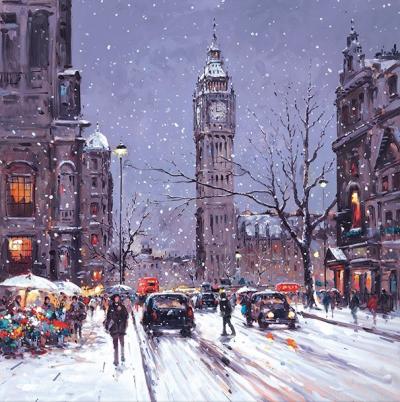 Traditionally when our minds wander to snow-filled scenes, we tend to imagine rural panoramas; yet cities can also steal the seasonal limelight when it comes to seeing its most recognizable architectural features draped in a blanket of white. And no urban sprawl is quite as characterful in such situations as London. And who better graphically qualified/illustratively equipped to convey a snowy tale of one (if not two or more) cities than the accomplished and much-loved Henderson Cisz. This early part of 2018 breaks cover in the contemporary landscape art world with the advent of Cisz’s brand new giclee on board limited edition piece, entitled ‘Winter Palace’. The palace in question (and hand-signed picture) being that of Westminster, which as ever looks very much the part come rain, shine or as captured here, snow. This 20” x 20” board only pictorial realisation is ready to enquire about with immediate effect, and given the habitual response to the award-winning Cisz’s every new reveal, we’re bracing ourselves for a degree of interest.