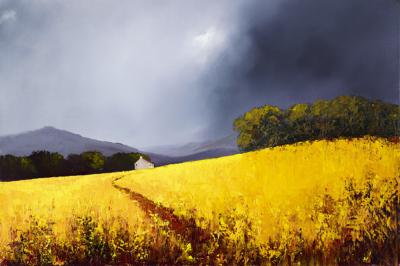 Despite an academic background in chemistry, much celebrated and widely-regarded contemporary landscape artist, Barry Hilton had always shown what he describes as a keen interest in the crafting of studio pottery and later went on to achieve a first class Honours Degree in Tableware Design with Ceramics, before eventually following a more 2D creative career path after progressing from the point of hobby to full-time profession as such.

Facilitating anything and everything tool-wise from a knife and a scraper to the more orthodox approach symbolised by a traditional brush, Hilton will experiment with whatever as he strives to create the effect he’s looking for in his mind’s eye. Although nearly always via the medium of his beloved and much trusted oils which he says afford his a greater diversity and versatility. Hilton’s very latest (and strictly limited edition) pictorial offering witnessed here and entitled, ‘Whispering Fields’ forms one quarter of his brand new Autumn 2014 mini-series, and is available to order right now in this unique hand-signed embellished canvas board representation via the usual channels of communication.