Under My Umbrella by Alexander Millar 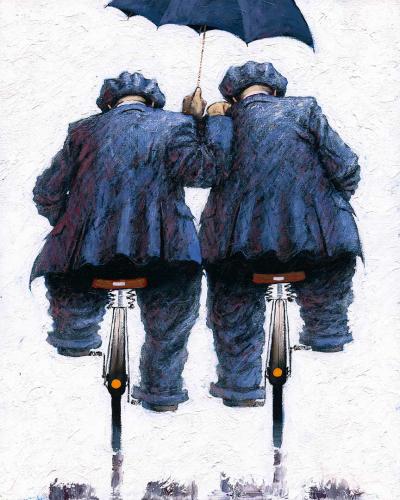 Frequently compared to the Greatgodfather of northern observational art, L.S Lowry, acclaimed contemporary figurative artist of today, Alexander Millar is far from restrained by the shackles which might be the case of a lesser creative tour de force. Whilst Lowry might have concentrated his social fabric-picturing compositional work on the people and places indicative of Britain’s North West, the award-winning Millar strays further north and east to seek community inspiration; in the guise of his personality-obliging gadgies for the most visual part, and as enjoyed here in his most recent pictorial foray.

Released as a key part and parcel of Millar’s brand new Spring 2015 portfolio, ‘Under my Umbrella’ is a giclee on paper limited edition study which joyously pictures a couple of the aforementioned blue collar citizens of the artist’s native Tyneside returning homeward, whilst attempting to shield themselves from the ravages of the hostile weather overhead. And all the time balancing their bicycles as close to one another’s as is physically possible, due to the underlying fact there is but the one brolly from which to escape the throes of Mother Nature. Now available to enquire about, we’d urge those wanting to do so to move quick to avoid potential disappointment later.