Tweedle Do And Tweedle Don't by Peter Smith 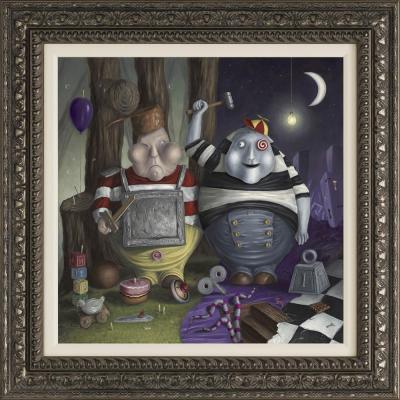 Having found a mysterious cigar box on her doorstep a now 50-year old Alice (of Wonderland fame) discovers a key on opening it, which apparently forms a perfect fit for her Grandfather clock. Placing the key into then lock, a middle-aged Alice is suddenly thrust headlong into a brand new adventure, courtesy of one of Lewis Carroll’s biggest fans. Of course we know him better as Peter Smith, the widely regarded and best-selling contemporary fine artist who makes a pleasing habit of returning to his much-celebrated genre fold again this Autumn 2015.

As part and parcel of his loosely described latest collection – itself entitled, ‘Lost Alice’ – ‘Tweedle Do And Tweedle Don't’ is just an episodic illustrative snapshot/visual manifestation of Smith’s unique 14-chapter perpetual tale, as seen through his eyes and now through ours. Presented as a strictly limited edition (150-piece only) compositional offering at this juncture, all 150 iterations come bearing Smith’s much sought after moniker for added kudos.