Toto, I've a Feeling We're Not in Kansas Anymore by Craig Davison 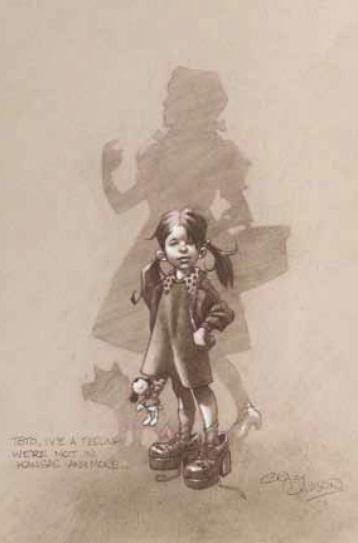 Anywhere else and the imagining of a childhood version of a woman herself play acting the role/dressing up as Dorothy from ‘The Wizard of Oz’ might set certain alarm bells ringing, yet by explaining Craig Davison’s brand new illustrative reveal a little better we can set the pictorial record straight once and for all. Uncharacteristically, the revered contemporary figurative artist has, for once, turned and tuned into someone else’s active imagination, rather than his own mental imagery from his formative years, the fruits of which labour is borne graphic witness to here.
In Davison’s brand new limited edition (and hand-signed) giclee-presented work of the childhood-reflecting, shadow-placing art with which he’s quickly become synonymous for, the respected and best-selling artist’s wife has provided the visual memory and looks back to see herself in the Dorothy figurative, pretending to be her (then) role model in the agonizingly simplistic yet devastatingly effective, ‘Toto, I’ve A Feeling We’re Not in Kansas Anymore….’.