The Joker by Zinsky 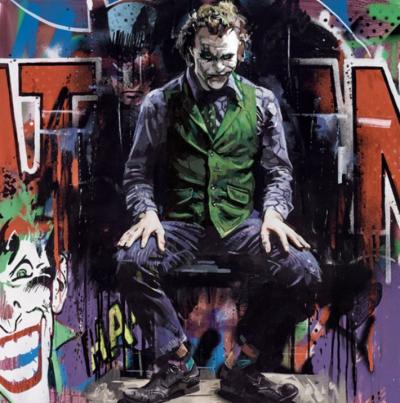 Providing malice and malcontent by the spade-ful and kookiness (albeit of a wholly destructive nature) by equal measure, ‘The Joker’ is the master of all he surveys. Or at least according to his own specifically warped sense of being and challenged state of mind. And who better to compositionally cement Batman’s notorious arch-nemesis of graphic novel and silver screen, than one of his generations’ most gifted contemporary fine art practitioners; namely Zinsky.

Returning to the scene of many of his recently shot pictorial crimes of passion, the best-selling and much sought-after Zinsky is back with a visually evocative vengeance this Spring 2016, in the way, shape and form of this brand new hand-embellished and signed canvas study. The aforementioned board only limited edition measures some 26” squared and can be yours to have and to own in but a jiffy if you make the first move. A initial move that merely requires the lifting of a phone, the sending of an email or the rocking up in person to our gallery, so as to set the purchasing ball in motion. We look forward to hearing from you one way or another in the foreseeable then….