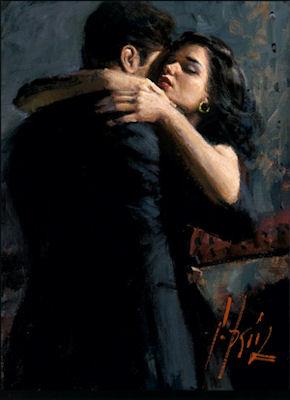 On the horizon for Fabian Perez is a major project which sees him working towards a rare government-funded public museum exhibition in his native Argentina, whilst there’s rumours abound that he’ll be selected as the official artist of the 2016 Olympic Games hosted by Brazil, so as you can see for yourselves the future is looking extremely bright for one of the planet’s most celebrated and continually anticipated young contemporary figurative artists. For the here and now though, fan and collectors must settle for this, the best-selling fine art practitioner’s brand new Autumn 2014 pictorial unveiling.

‘The Embrace III’ is a gargantuanly expressive composition, as we’ve come to expect from Perez, and projects its own heartfelt narrative and strident sense of purpose in the hugely illustrative flesh. Or rather, and to be more accurate, giclee on board iteration in which it’s presented right here. Revealed as part of Perez’s equally new and expansive seasonal catalogue, also available to order hereabouts, this gorgeous and intimate new study bears the artist’s much sought after moniker found on the surface area of each one of the strictly limited 195 editions which have now entered the public domain and awaiting new homes