Show Your Colours by Hayley Goodhead 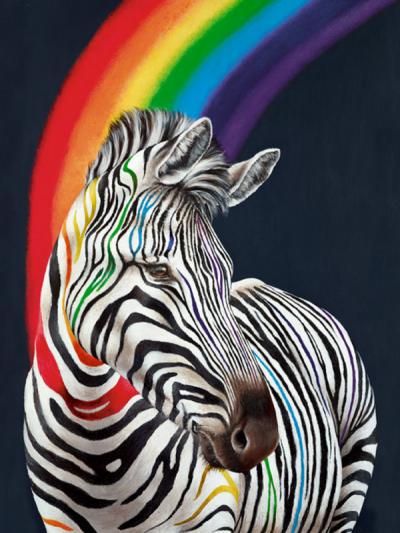 Mirroring the polar opposites of its own habitual colourations, a stunningly captured zebra contrasts its resolute black and whiteness with an infusion of rainbowtastical hues and saturation, bled from the depths of the dark backdrop imagined by Hayley Goodhead. ‘Show your Colours’ is the brand new Summer 2014 release by the hugely popular contemporary animal artist, who more normally creates more obviously humourous pieces; yet on this occasion has delivered an unyieldingly sober but at the same time, gregarious study.

Either way Goodhead’s army of fans and seasoned collectors alike will rejoice on sight of the giclee on boxed canvas affair, of which is limited on launch to just 195 editions; although all brandish the in-demand Goodhead signature you’ll be pleased to learn. The 21” x 28” example of Goodhead at the peak of her illustrative powers is available to order right now.