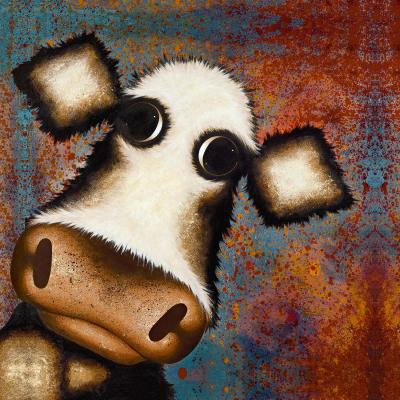 As well as being the title of a West End musical (based on the literary works of Charles Dickens), ‘Oliver (minus the exclamation mark)’ is also the title that acclaimed contemporary animal humour artist, Caroline Shotton has afforded her latest compositional study. And similar to the stage production, the resultant creative presentation has already caused quite a stir among the general public. The contemporary art-buying general public in the case of the brand new Spring 2017 giclee on boxed canvas limited edition iteration we’re poring over here. This delightfully beguiling 36” squared study, pictorially focuses not on a small boy demanding more food, but instead an equally optimistic bovine hoping to catch the attentions of those queuing up to add to their existing art collection. Or alternatively, use as a starting point for a future one. Either way, those securing this hand-signed study by the award-winning Shotton, certainly won’t be disappointed with the end product; and suffice to say will be the envy of their friends and family.