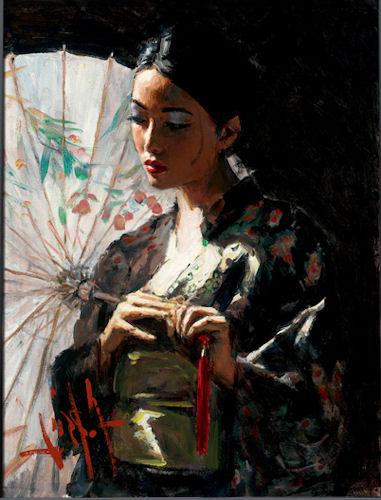 A volume of texture, intense colourations and bottomless pit of vivacious yet equally haunting colours are drawn out of Fabian Perez’s hallmark works, that is what we call an illustrative given, yet the critically acclaimed contemporary figurative artist has been pulling out even more stops again in recent times as he’s put together his sizeable and magnificent new collection. Released as an entire package this Autumn 2014 and to much fevered anticipation by his army of fans, followers and collectors alike, it’s this specific giclee on board study we’re familiarising ourselves with for the moment.

And what a gregariously crafted and considerately imagined piece ‘Michiko with White Umbrella’ is, as Perez focuses on a new illustrative departure in his already much-travelled picture book; one very much graphically indicative of the Far East. Offering his bespoke visual thoughts and compositional interpretations on a Geisha theme, this hand-signed new iteration by a fine artist widely acknowledged to be one of the best in the world right now is presented as a limited edition rendition. With a resultant 195 examples available, we’re confident that demand will surpass supply by some margin, so would urge all interested parties to make their intentions known ASAP.