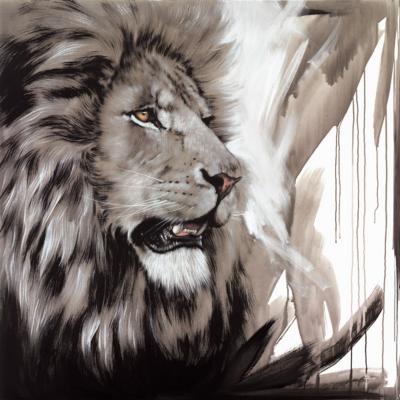 With a client list which has included the somewhat eclectic likes of broadcasters, the BBC and ITV, along with retail giant M&S, global financial institutions such as Barclays Bank and Virgin, as well as the government of the UAE, Jen Allen is quickly emerging as one to watch in terms of being amongst the UK’s most exciting young artists plying their trade today. The contemporary figurative and wildlife art exponent’s illustrative craft is symbolised by her single sitting palette and brush blasts, which – describing her typical approach to each new piece - Allen herself says; “Working this way gives my pieces a sense of immediacy which lends character to my art.”

Remaining true to graphic form, Allen’s brand new ‘Beauty and the Beast’ Autumn 2015 pictorial release seen here – and comprising part of her very latest collection – is destined to stir up powerful emotions in the eyes of all its future beholders, as the visually exquisite ‘Lion King’ makes all the right compositional noises now expected from Allen’s each and every reveal. Limited to a mere 195 hand-signed edition from the off, this giclee on board study is now available to enquire about/reserve/order instore, online or by phone. Those in the know won’t need a second reminder.