It Must Be The Moonlight by Jeff Rowland 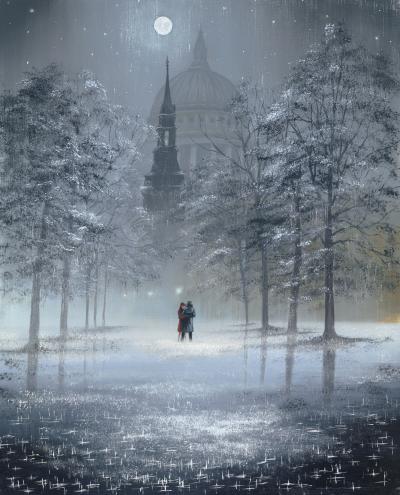 Movie fans flock to certain locations the world over to share the iconic scene often made famous by the presence of actors shooting a key scene in what turns out later to be a classic representation of its genre. However you don’t need to book a ticket to anywhere in particular if you’re a fan or seasoned collector of critically acclaimed contemporary figurative artist, Jeff Rowland, as the hugely popular painter brings that scene to your own four walls.

A self-confessed film fanatic, Rowland’s typical compositions hark back to better days and emotionally-overwhelming snapshots which focus on pivotal junctures in classic movies. Or if not, suggest and pictorially allude to such illustrative flippancy. Rowland’s very latest Autumn 2014 release makes no exception, offering us a glimpse into what could just as easily be a memorable scene lifted from an accepted celluloid masterpiece. ‘It Must be the Moonlight’ in reality is a Rowland-monikered, limited edition giclee on board piece, which along with his entire new collection is now available for interest to be registered.