Im a Dandy Lion, A Fate I Dont Deserve by Craig Davison 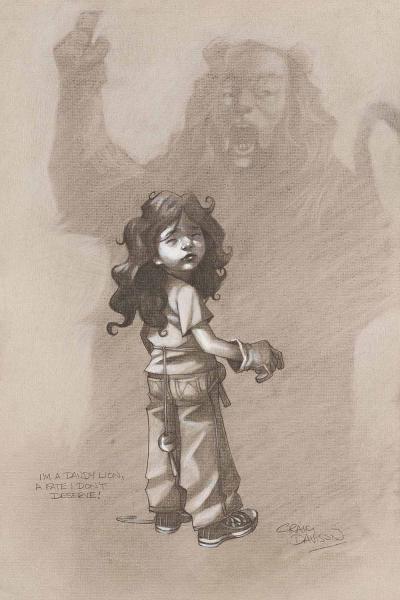 Precious few animals put the willies up you more than a ferocious lion, yet in fictional terms this hasn’t always been the case. Look no further than the cowardly lion which starred in ‘The Wizard of Oz’, a less savage and frightening lion you’ll never meet as it went around banging on about its lack of courage and essentially jumping at its own shadow. Shadows are what critically acclaimed contemporary figurative artist, Craig Davison does well though. And in this brand new 2014 reveal by Davison he paints a typically alternative view of an instantly familiar sight and sound from our childhood.
In ‘I’m A Dandy Lion. A Fate I Don’t Deserve’ Davison taps into and harnesses a youngster’s wild imagination and power to mentally imagine the seemingly unimaginable as they act out their fantasies in their own back yard for our illustrative entertainment. On this graphic occasion, a mane-haired kid subconsciously thinks themselves to be said lion, despite us knowing better. But who are we to spoil their fun in this typically inviting and melancholy limited edition, giclee presentation released this Spring.