Guns of the Magnificent Seven by Craig Davison 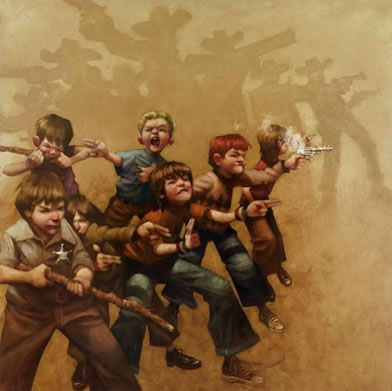 In the throes of yet another impromptu, unrehearsed adventure, seven best buddies saddle up their sparkling chargers, answering to the names such as Grifter and Chopper (although not pictured, yet definitely the case), and head off into battle, the illustrative incarnation of their big screen heroes who loom up in the background of celebrated contemporary figurative artist, Craig Davison’s latest graphical odyssey.

‘Guns of the Magnificent Seven’ is an illustratively considered and graphically measured insight into what goes on in the minds and active imaginations of children of the 1980s, as they act out the cinematic trials and tribulations of Bryner, McQueen and Coburn on their own turf; sheriffs of their own manor and architects of their own non-celluloid end game.