Free Spirit I by Gary Benfield 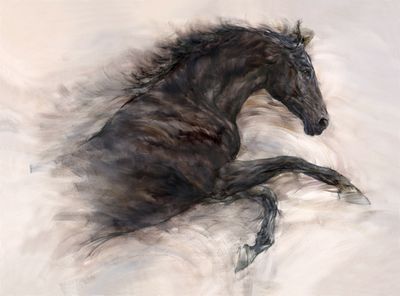 Thundering along at breakneck speeds, chomping at its metaphorical bit, gliding to prominence and victory, whether or not the black beauty in pictorial question is a racehorse or not is open to interpretation, but what is for sure in much sought after contemporary artist, Gary Benfield’s most recent visual release is the artist’s understanding and respect for the equine subject as it strives for success either in the field of contest or play. There’s a majesty in Benfield’s enigmatic strokes and illustrious flourishes that afford this presence a near photo-realistic feel and virtual touch, and that’s despite the fact that all the power and glory belongs to the upper torso, rather than the entire creature going hell for leather. But that power is rooted in the details and the foundations from which Benfield typically constructs his compositional essays which manifest such finely etched surface-scapes.