Dare To Be Different by Hayley Goodhead 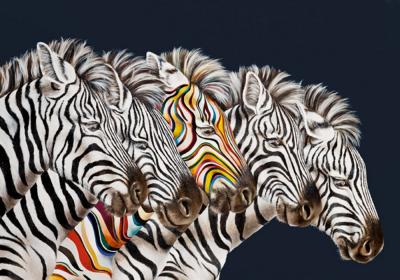 It’s not so much that one of the zebras stands head and shoulders above its brethren here, more a visually conclusive case that one offers a slightly more colourful character. However we all know that appearances can be deceptive and at the end of the day we’re pretty sure that none of the gathered are any less charismatic or personable than the vividly hued one in the middle of the pack. Just in the interests of zebra fairness.

‘Dare to be Different’ is the graphically irrepressible new compositional number from universally-acknowledged and equally widely respected new Contemporary wildlife artist, Hayley Goodhead; who has gone out of her illustratively unshackled way to deliver us this magnanimous new giclee on boxed canvas study for Summer 2014. Individually signed by the boundary-pushing fine artist herself, the brand new 30” x 21” iteration is offered as a strictly limited edition example of her craft, with a mere 195 pieces available from the outset.