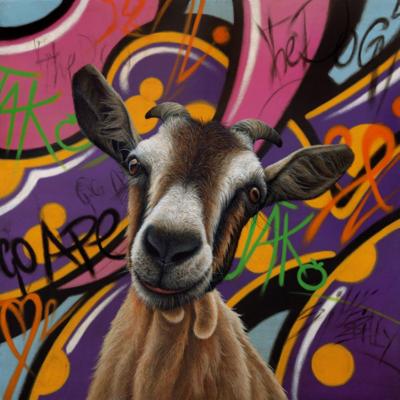 This isn’t the first time we’ve witnessed ‘Crazy Dave’; although having said that he was a little less illustratively bonkers last time around if our memory serves us correctly. Transplanted into a far more urban setting on this paper occasion (the last time Dave was supplanted in his more native and rural New Zealand habitat), the Dave in question originally met the acquaintance of his contemporary animal abstract artist friend – and obviously man behind these graphic animal odysseys of a pictorial nature - Paul James, while the latter was touring New Zealand a few years back.

Suitably inspired by Dave (as he was by a number of other animals on his journey which ultimately led to the compositional manifestation of ‘Urban Gorilla’ and ‘Dog End Street’ amongst others, at the time), the best-selling and hugely popular James set about committing his uncanny likeness to his favoured creative materials, and the rest is history. Released this Winter 2014, his hotly anticipated new reveal is presented as a limited edition study and as such is expected to generate a huge amount of interest from the outset.