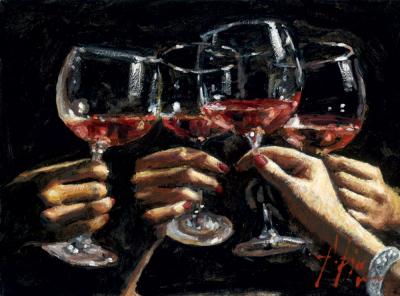 In 1987 the as yet unknown contemporary figurative art exponent, Fabian Perez embarked on a journey that was to last until the present day. After six months in Rio he took up residence in Padova, near Venice, where he stayed for seven years, studying with his martial arts and lifestyle guru, Sensei Oscar; and painting daily before moving on to Okinawa, Japan. Eventually the (now) best-selling and critically acclaimed Perez put down roots in Los Angeles, after initially finding employment as both a busboy and a model, while also running odd jobs for Universal Studios. With his days full, the dedicated budding fine artist, Perez painted throughout the night and considers this the most creative period of his life. The labours of this illustrative love have taken many illustrative shapes and graphic forms since, including his brand new Autumn 2016 hand-embellished giclee ‘Brindis Con Rose’ viewed hereabouts. Limited to a mere 100 individually-signed iterations from the get-go, we’d urge those interested to contact us sooner rather than later to secure ownership.